First, there was The Sin Soldiers

Next, The Crystal War

It all comes to an end, in a thrilling conclusion, with The Hollow World.

Sooooo excited to finally be able to show the gorgeous cover by @shayneleighton to the world!

SONS OF FIRE comes out on January 14th.

One brother destined to rule…

…The other cursed to exist

Tell me what you think!

All authors know that reviews are the lifeblood that flows through our veins, the air we breathe, the very fabric of… I can get even more dramatic if you’d like!

In that vein (see what I did there?) I am going to run a one time promotional opportunity for anyone who hasn’t left a Goodreads and/or Amazon review of The Sin Soldiers.

Leave a review this week on Goodreads and Amazon starting right now (an HONEST review), anytime this week, until next Sunday (9/1) and be entered in a random drawing for a chance to win a limited edition Sin Soldiers t-shirt.

Modeled here by yours truly!

Heartfelt thanks to all those who read and review every day.

I’m so excited to finally be able to post the title and prospective release date for the second book in the Fragments series! THE CRYSTAL WAR is currently undergoing line edits with my publisher, getting ready to make its debut in the spring of 2020.

Anyone who subscribes to my newsletter will be the first to receive updates. 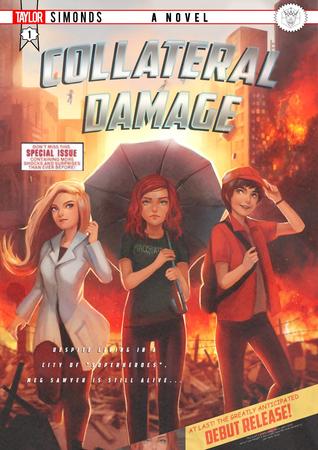 Power. Courage. Invincibility. The marks of a true hero.

Meg Sawyer has none of these things.

Meg has never stopped a moving bus with her bare hands, been bitten by a radioactive insect, or done anything moderately resembling saving the world. She doesn’t have to. She’s a background citizen, a nobody, one of the swarms of faceless civilians of Lunar City–where genetically enhanced superhumans straight out of the comics have thwarted evil for years.

For as long as the Supers have existed, Meg has had one goal: to not become a casualty in their near-daily battles for justice. And for the last seventeen years, she’s managed to do just that. Sure, her minimum-wage job at the local coffee shop isn’t great, she can’t even leave her apartment without loading herself up with protective gear, and her car was just hijacked to throw at a supervillain (again), but she’s not dead yet.

But when Meg accidentally finds one of the city’s perfect, invincible protectors murdered under extremely suspicious circumstances, her whole “innocent bystander” strategy falls apart. After being coerced by his determined girlfriend into a mission to help prevent the deaths of the remaining Supers, Meg finds herself forced into the foreground of a story she never wanted to be part of—one that challenges everything she thought she knew about both her city and herself.

I’ve been on sort of a superhero kick lately (hello Avengers!), reading the ‘Archenemies’ series and ‘The Supervillain and Me.’ But Taylor Simonds’ Collateral Damage is such a unique take on the premise of living in a superhero-infested city, it was a breath of fresh air.

Simonds’ fresh perspective of the ‘everywoman’ civilian was spot-on. I loved Meg, and her cynicism with all of the heroes and villains running around, just tired of being stuck in-between as … here it is – collateral damage.  Great title, by the way! It sums up what’s going on in the midst of all the Supers, and even takes things like insurance and damage reimbursement into account.

Simonds’ writing was fast-paced and fun, and she didn’t pull any punches with what happens when people are seen as expendable. I already mentioned Meg, but I loved Oliver and the whole cast of Supers (not giving away their identities, so don’t worry).

A forum for the works of Tracy Auerbach